Parkland Flag Football Is Looking Forward To Yet Another Strong Season

Parkland Flag Football has played a vital role in encouraging children and families to get involved for decades. The kids are given the opportunity to come out and play with their classmates; meanwhile, parents are given similar opportunities to network and get involved. Although the organization was incredibly successful last year despite growing challenges, everyone involved is looking forward to an even more successful 2021.

“I’m looking forward more than anything else to having the families back that couldn’t play last year,” says the president of Parkland Flag Football, Matt Kauffman. “To have those kids that have played for eight straight years not play last year was heartbreaking.”

Nearly 300 families sat out last year due to COVID-19 concerns. However, this year, Kauffman anticipates quite the opposite as far as player turnout. “I think we’re going to have more kids than we’ve ever had before. There’s no cap on how many can register—there’s never too many kids. We can always make more teams.”

Parkland Flag typically sees a turnout of about 900 kids. Such a large volume of signups grants kids the opportunity to play amongst their friends and classmates, meaning there’s no need to turn to neighboring cities to set up games. Each league has anywhere from four teams to as many as eighteen teams, with plenty of players to yield a fun and friendly competition.

The families, coaches, and organizers are looking forward to another exciting season come August. Although it’s too soon to predict what kind of hindrances the pandemic might bring, the organization is planning for the best possible outcome. Parkland Flag remarkably managed to organize the only youth flag football league in the state last year, giving the kids a semblance of normalcy despite all of the uncertainty in the world. Kauffman says he could have never done it on his own.

“It’s a significant feeling of appreciation for everybody in the city—from the parents, to parks and rec, and the referees, and especially the kids. To come out and play last year when there were a lot of reasons not to is just a phenomenal experience,” adds Kauffman. “I just can’t get over the participation and contribution of the board, the maintenance crews, and the city as a whole coming together on something as simple as flag football. It became a bit go a symbol for us, being on one team, and I’m aiming for that all over again this year—minus the COVID part.”

Boys and girls ranging in age from kindergarten through high school are encouraged to register for the upcoming season. All practices and games will take place at Pine Trails Park. Mandatory evaluations will be held the week of August 16th, and the season will officially kick off immediately after Labor Day. Parkland Flag Football is open to non-residents as well, but an additional registration fee will incur. 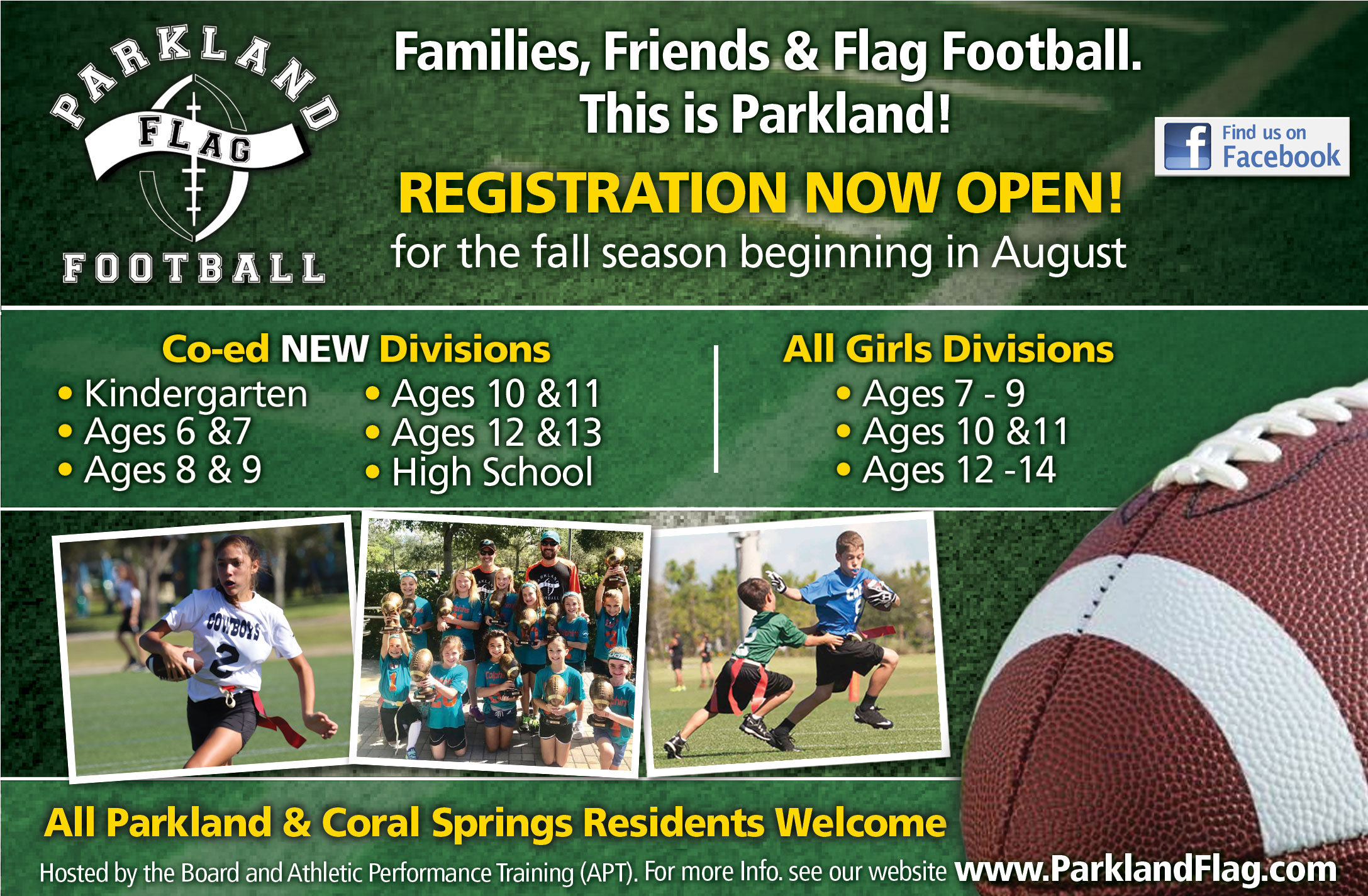